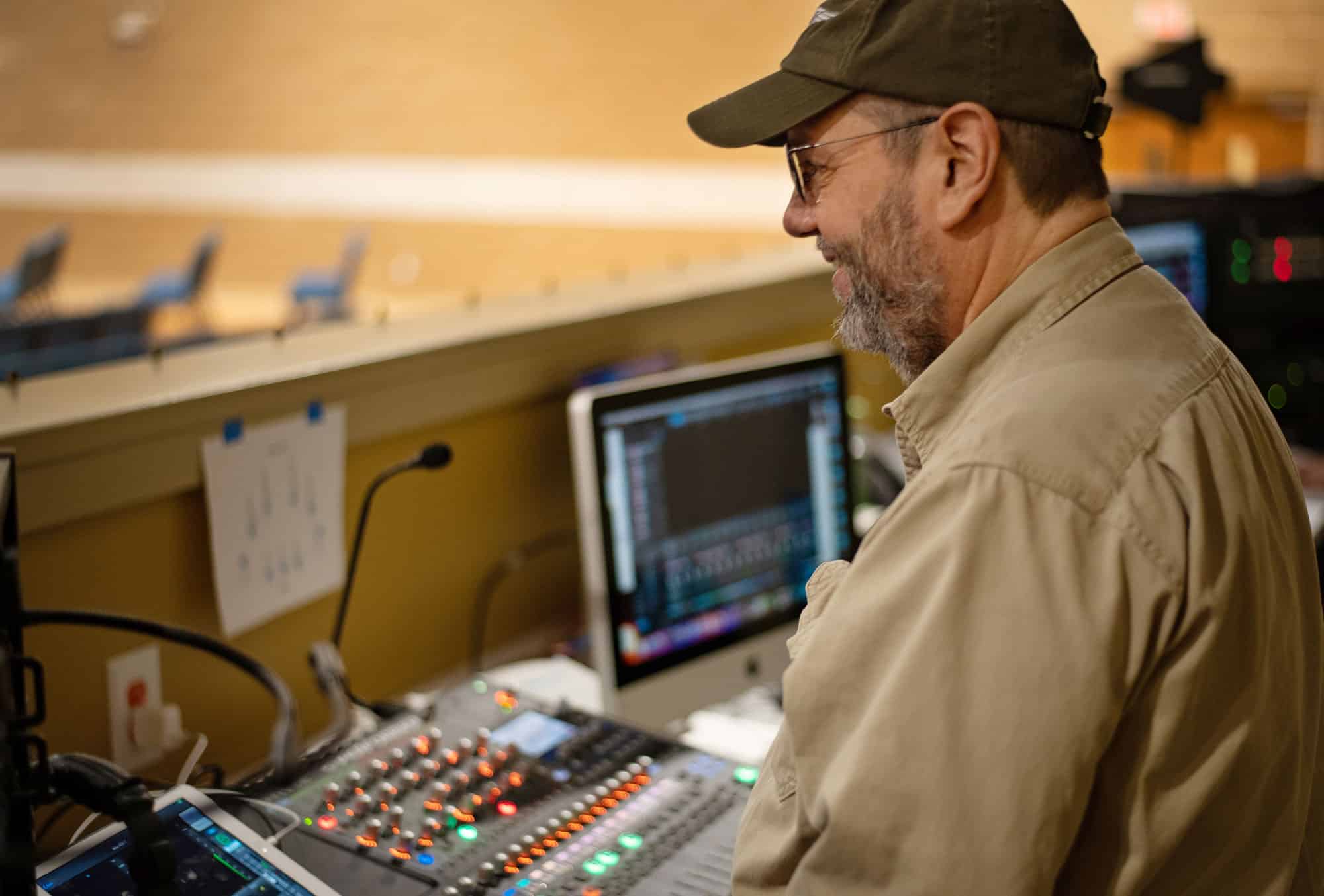 This month I interviewed Jack Rivera. For 18 years he’s volunteered at Salem, where he oversees the technological aspects of worship and other ministry events. A lot of you may know him as “the sound guy” but God’s use of his talents at Salem has grown well beyond simply sound.

The role evolved over time into a planning and general oversight of the logistical sides of worship using his stage production and technological experience. As Jack put it, “part of it is protecting the equipment, part of it is making sure the ministries get what they want…. And in my spare time I run sound!”

Loving Those You Shouldn’t

In preparation for writing this article Jack told me many stories of God’s work. None of them stuck with me in the days after as much as the story of how Jack became a Christian, how an impossible love (by the World’s standards) saved a soul.

Before he became a Christian Jack was hurting, and he didn’t want anything further to do with so-called “Christians.” He thought he had found a real love. She was married, but she was leaving her husband soon and then their future could start. He had already moved from his home in New Orleans to prepare a place for the two of them to live together in Miami.

She said she was a Christian, and was adamant that he become a Christian too. Jack may have been considering it… but then he caught her cheating. She wasn’t coming to Miami to be with him, now she was with someone else.

“Oh, I really want to be a Christian now!” Jack thought.

His world was shattered. He was now far from home and he was alone.

Then the phone rang. It was a woman he had met 6 months prior… his now-ex’s mother. She too was a Christian, and she wanted to stay in touch with Jack. She was very apologetic about what her daughter had done to Jack, and she wanted him to know that this is not what Christians are supposed to be.

“Her mother talked to me multiple times a week. Long distance, calling me, to give me someone to talk to. To just be there for me and at the same time she was encouraging me to continue seeking the Lord.”

Jack had often passed a sign for a church, but it just had an arrow pointing to seemingly nowhere, certainly not any visible church.

Jack drove up and found a middle school, where the church was meeting in the auditorium. He began to attending his first services there and someone invited him to a Bible study. He became a bit more involved, met people at the Bible study and began to talk about what they were doing and where he was in life.

One Monday night, the pastor came to visit Jack. They sat and talked, and Jack “accepted Christ in the middle of Monday night Football.”

I have to wonder… how many of us would show the kind of love shown to Jack by that mother. Surely the thought of Jack was painful for her, a reminder of her daughter’s sin? Yet she showed him a supernatural love, and so reflected the true love and light of God into Jack’s dark life.

I pray that if I am ever in a position to show such love, I will not hesitate.

Impact in the Little Things

Jack can look back to an assorted lifetime of experiences where he can see how God had put a plan in place from day one.

“To see all the different things that I had to call on to support Salem, went all the way back to these young ages of things that happened in my life. It’s just kind of cool to see this is where it all came to fruition. Salem caused me to need all these skills and this experience.”

Jack recounted an experience during a Salem mission trip to Thessaloniki, where some of the missionaries came up to Jack and said “Are you the guy that puts out the podcast for Salem every week? We just wanted to tell you how much we appreciate having that podcast. Every week we look forward to that. We don’t get to worship in our own language here, it’s so nice to be able to hear a sermon in English from the church that is helping sponsor us.”

During that trip, multiple missionaries came up to say similar things about the podcast and how important it was to them. God was using it to help people in other countries get their spiritual refreshment where they aren’t supposed to be professing Christianity.

“it’s not just the wires and the settings and all, it’s the fact that you are helping people worship. You are providing an avenue for people to try to get closer to God.”

Jack works hard to minimize distractions so others can worship as freely as possible. It’s the kind of work that is most noticed only when it’s gone, but God uses to make the message from the pulpit and worship more effective.

How Can Salem Help Jack?

In getting more people involved in the Media Team at Salem, Jack hopes to let them experience some of the rewarding things he has gotten to experience over his years.

“I can tell you stories all day long, but you won’t know what it’s like until you’ve experienced it.”

Having more volunteers would spread the load and help everyone stay refreshed and have time for worship.

Whether or not you have a desire or aptitude to help directly in the booth, everyone can pray. When asked what people should pray for him about, Jack asked for prayer for “patience and endurance.”

“Patience in the sense that I always want to just do everything right away and get it done, but things have to evolve organically within the church and we have to be patient to let those things take root and grow with it.

Endurance more so because having been retired now I have learned how to be retired. Which means I don’t have the internal body strength and mental determination to push through some things. (But) there are still things to do. Covid has done a lot to take the wind out of my sails in doing things, but I’m looking forward to doing more again.”

Jack would also like to thank those who have been praying, and continue to pray for him:

“I think it’s because people have prayed for me that I have learned peace. And to be happy even if sometimes things aren’t as nice and neat as I would like them to be. I’ve learned to find some peace in that. Because the reality is I’m not saving anybody from the booth, it’s got nothing to do with me.”

Jack expressed that while the behind-the-scenes work he does is usually a thankless job in a church, “Salem is one of those places where there has never been a shortage of gratefulness.”

I hope that continues, I don’t think anyone this side of heaven knows the full extent of how much Jack has given to this church. Thank you Jack, and I hope your example will encourage and inspire many more to serve God faithfully.

Do you have a story of God’s work to share? Let us know! Send your story ideas to Andrew at aosborne@salem-bc.org