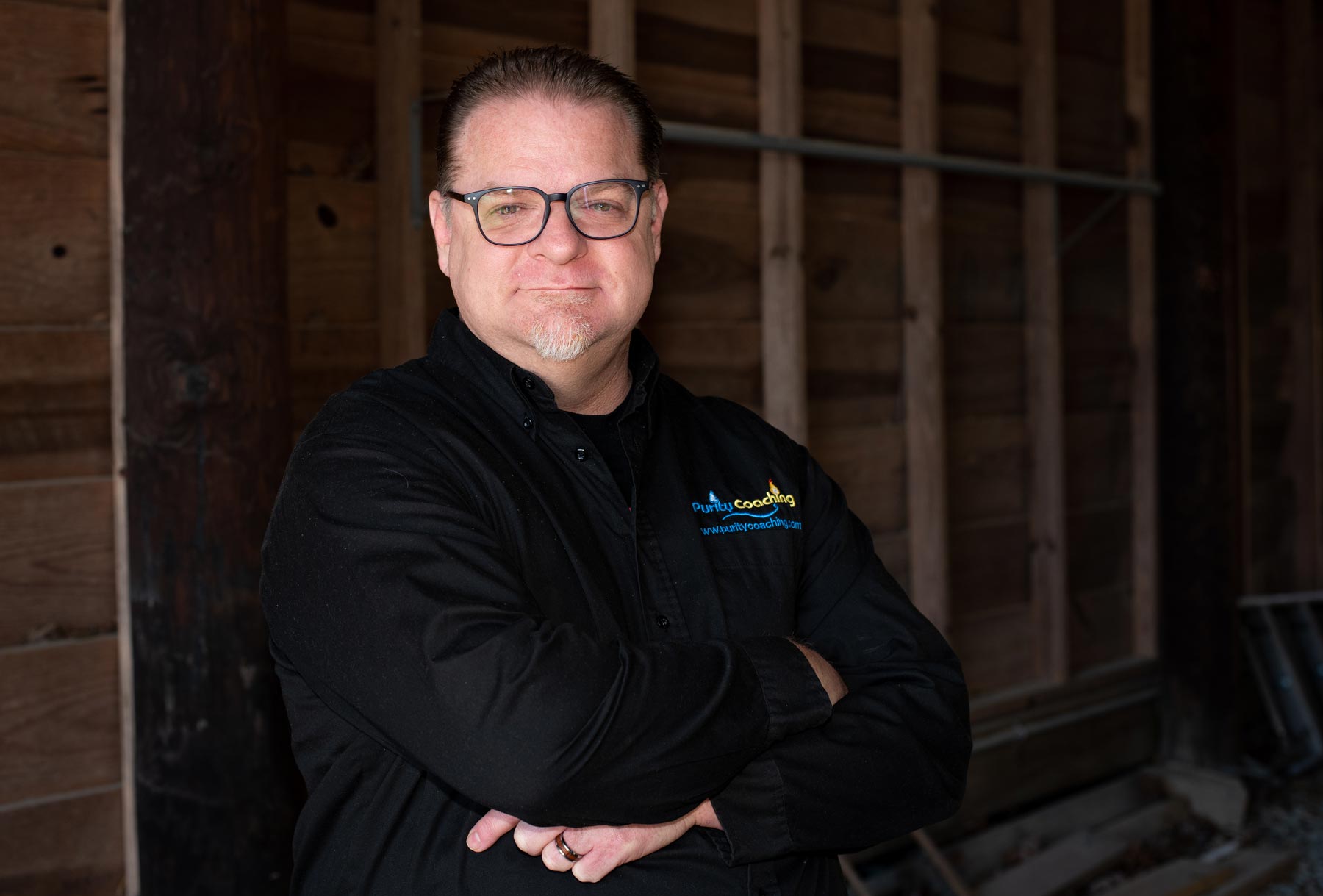 Jeff Fisher’s Story is an example of God’s power to redeem and renew. Our God is a master at taking what is broken and fashioning the pieces into something new. God is not one to be limited by our failings.

Today Jeff leads a Men’s Purity group at Salem. While his group is not an official ministry of Salem, Jeff and his wife Marsha have been members of Salem for nearly 12 years and Salem is proud to partner with them.

The group is an outreach of Inside Out Ministries, a non-profit that Jeff and his wife co-founded to help men and women who are struggling with issues of lust, unhealthy relationships, and pornography.

Jeff started out as a pastor and church planter in Texas and New York. For 15 years he worked as a pastor, outwardly he projected the appearance of a great, godly man, but inwardly he had a secret struggle.

I was a really, really good hider. I’m a nice guy but boy I can manipulate. If someone got close to discovering my struggles, I would hide, lie, manipulate, distract, or do whatever I could to draw questions away from me. People with hidden behaviors often do whatever they can to cover them up.

One day God seemed to say “I love you too much for you to keep hiding Jeff” and ripped the cover off of Jeff’s secret struggle. His computer history was uncovered by some of his pastoral mentors, and the truth was laid bare: a struggle with pornography and sexual temptation that had stretched back for many years.

From my teenage years I struggled on and off with sexual temptation and pornography. I thought that marriage would cure it, I thought Seminary and pastoral roles would cure it, but I always kept drifting back.

Jeff chose to step away from being a pastor so he and his wife could concentrate on getting help and healing, but God still had a plan for him.

From Healing to Outreach

Jeff and his wife moved to the Raleigh area to live closer to family and begin their healing journey. He began attending a men’s purity support group and with the power of the Holy Spirit began to find success and healing.

He and his wife came to realize that God was directing them to tell their story and share the resources they had found during their own journey, so that others may find healing. It began with a blog and a podcast, but continued to grow and evolve and still continues to develop.

In 2012 they founded Inside Out Ministries. They created support groups, wrote resources and networked with other purity and marriage minstries. People around the world started reaching out to them for help.

In 2015, Jeff took the material that had been developed and compiled it into a workbook called the 21-Day Purity Jumpstart, which has since been translated into 6 languages with more translations underway.

I have taken mission trips to Russia and Uganda to teach purity seminars. Talk about global ministry! And talk about redeeming something that was so terrible in my life and marriage and using it for God’s glory!”

Hope for the Hurting

God has brought healing to many through the ministry of Jeff and Marsha Fisher. Jeff reports that many of the guys in the group finally feel like they can experience what “real church” should be like. He sees the group as carrying out Paul’s charge in Galatians:

Brethren, if a man is overtaken in any trespass, you who are spiritual restore such a one in a spirit of gentleness, considering yourself lest you also be tempted. Bear one another’s burdens, and so fulfill the law of Christ.  — Galatians 6:1-2 NKJV

Safety and confidentiality are two of the most important values within their ministry. The Fisher’s seek to create a safe environment where anything can be shared, such that the power of the Enemy can be taken away and God’s healing has room to grow.

The men and women that God sends myself and my wife often find hope beyond their crisis. They find healing. They find support… The biggest reward I get is seeing a sexually broken man be restored and actively helping others with their struggle. The goal of recovery is not to get fixed, get back to life like it was and sweep it all under the rug. There are too many people in the Body of Christ that need to hear your story of brokenness. They need to hear about your journey, your ups and downs, and what you are still learning.

Why a Support Group

Recovery doesn’t just mean “behavior management,” but instead it is a matter of change in the mind and the heart. Places that only God can work.

Jeff recounted the story of a man that came to the group years ago. He was accomplished in life and business, but he was desperately trying to pick up the pieces of his marriage due to the sin in his life.

About 2 months into attending the group he shared that he had a breakthrough moment. His wife was sharing her pain with him and she started to cry. He told us, “It was like a light went off for me. For the first time, I saw how deeply my actions were hurting my wife.” No question it was the Holy Spirit creating that realization of truth in his heart. From that point on he was a different man and had great success in his purity journey.

These “breakthrough” moments are one of the highlights of Jeff’s ministry. Jeff was quick to point out that these moments don’t come from his words, or the environment he creates, but only by God’s Spirit speaking and being heard in the individual’s heart.

Support – I need to build a good support system

Structure – I need to establish boundaries, accountability, and whatever is needed to stay on the path

Strategy – I need a good defense to help keep dangerous stumbling blocks out, and a good offense to bring in the healthy growth and make progress.

One of our key ground rules in the group is “God does the fixing.” Only God can change the heart!

Jeff finds that a lot of people think that those who struggle with sin just need to “love Jesus more” and that will take care of it. Of course on some level that is true in the sense that we need to let God into the deepest place of our hearts, but a common mistake for someone in the midst of the struggle is the belief that “loving Jesus more” means they need to just try harder and be more religious.

Most of the time, that will not work.

The person in habitual sin cannot break themselves free. They need key people in the body of Christ coming alongside them to help them find restoration. The best thing you can say when someone breaks the silence is, “Wow! Thank you so much for trusting me with that. Tell me more. You’re not alone. Let’s walk together on this one to find some help.”

Hope for the future

When asked what he would wish for most in ministry, Jeff responded that he wants to see “spiritual grandkids.” He wants to see the people that God uses him to help going out and sharing their story, and helping more in turn.

Jeff further asks all the people of Salem to help them share their story:

So many people struggle in silence, feeling like nobody would understand. Pass along our email and phone number to husbands and wives and singles who are struggling in sexual sin. Help them know there is hope and that they are not alone. If they’re sharing with you, they trust you. Don’t betray that trust. Embrace it. It’s likely God is asking you to slow down and come alongside this person so they can find help.

Do you have a story of God’s work to share? Let us know! Send your story ideas to Andrew at aosborne@salem-bc.org.

Pass on the Excitement!

Joe & Loretta Campbell: Whatever it Takes to Make Disciples